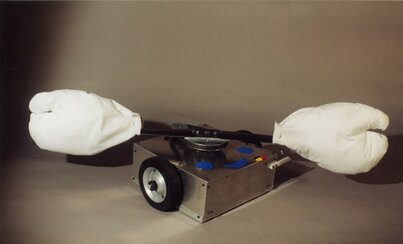 ​Starting at the age of 10 I invented and built combat robots which I fought in Robot Wars and BattleBots. My first robot, Dough Boy, had a minimalistic aluminum body with a lawn-mower blade on top that spun around horizontally. Before the match I would put a chefs' hat on the robot and white puffy gloves over the blade to resemble the 'Dough Boy' character. Then I removed the costume to reveal Dough Boy's weapon right before the match began.
​
My second and most famous robot was Tentoumushi, a ladybug character. The red dome-shaped body lifted up, drove towards it's opponent, captured him and then ground him up with a grinder mounted inside the body. McDonalds made a Happy Meals toy of Tentoumushi and I was even interviewed on Jay Leno with this robot.

My third combat robot was named Mr. Squeaky, and was by far the most deadly yet. It was in the shape of a bat and was only about 4 inches tall. The wheels protruded on each side allowing the robot to always be able to drive even in the event that it was flipped over by the opponent. On the front there was a titanium blade with steel ends/weights that spun so fast it would pulverize computers into streams of dust and go through warehouse walls.